i really like the ability to create generic links between tasks, and the ability to use tasks as a custom field. but i want a little bit of both of these features combined.

please implement a custom field to show dependencies or generic links that makes and shows the two way nature of those relationships.

the icons showing links automatically being added to both tasks is great, but i want to see, and open, the linked task straight from the list/board. with lots of tasks being linked in different ways to other tasks on the same view makes it challenging to determine which tasks are linked together.

Another vote here. I'm trying to move from Monday and the linked tasks there show the group name and color (status in ClickUp speak) when expanded which makes it very easy to select the correct task from a large board in my use case (using a form for students to submit homework, making their name the task name and a status as the homework type). This also uses automations to move a task to a specific group (status in clickup) based on a status (dropdown in clickup), which is very effective for organizing incoming information via forms.

This is exactly what I am after as well. I like the purple 2-way link but I think it's in the wrong place. It would be more useful appearing as custom field. Just like the existing task link custom field - but that one is only 1-way and needs to be created on both tasks.

Also, the thing I don't like about the purple link is you cannot reorder them.

My use case from a project management perspective is linking many tasks (projects) to a single client, and because it's a custom field, the sort order can be changed.

From a CRM perspective, you can link contacts<->clients<->projects.

@Doug Rutter: hi, are you referring to contacts, clients and projects that are created in your CRM here? So you're thinking a custom clickup field to hold a CRM project id? Presumably you're contemplating only maintaining contacts, clients and possibly some scant project details in the CRM to preserve data integrity of those? That brings me to it would be nice to also have some custom read-only fields in clickup that could be populated from some custom code triggered from a webhook in the CRM.

@Justin Phebey: Hi Justin. Whilst my use-case is in my CRM space in ClickUp, it does not have to be CRM specific. I am thinking the 2-way relationship link could be used for any purpose. Just like the purple link does now. It would open up a number of possibilities for people.

@Doug Rutter: Hi Doug, thanks that makes more sense now, I never think of ClickUp being used in a more Airtable type way, only ever think of it as a PM tool. I agree that a relationship link would be useful, particularly if you could map certain values from the link into fields that were given more meaning, eg custom client fields into a set of fields that CU understood as being for that purpose and that drove some appropriate functionality such as granting guest access. A two way relationship would probably be easier to implement for data stored in CU rather than 3rd party software due to handling concurrency conflicts.

@Zeb: That's wonderful news. Any predictions when will you implement it?

@Zeb: would you be willing and able to share a bit more detail about how that might look?

not to look a gift horse in the mouth, but without these links automatically appearing in some visible and relevant way on all related tasks, configurably in any view, then i would argue the truth of This [feature] being "in progress".

but i am happy to know that you are working on something. i enjoy the feeling that the click-up team is so responsive to user feedback.

specifically, coming from airtable their smart relationships between records across tables is the functionality i want. obviously they would not be exact, but same enough that i do not need to keep pestering you about it. azure devops work item linking is another good example of desired functionality.

@brnnn: We're adding lookup, rollup, and formula custom fields as we speak. What we haven't fully decided is how to aggregate all of the other linking items we have within CU. Specifically, task links, dependencies, custom field links, and the website links that rollup into buttons. Any feedback is definitely appreciated!

@Zeb: Hey Zeb! Great to hear on this one, so since you're asking, some suggestions:

- two-way linking with the custom field. I'd like to see the ability to customize this, and in fact name the field in each of the respective linked tasks. Jira handles this well (one of the few things I like about Jira!), but you guys I think would be able to do it much more smoothly:

In the image, you can see a few basic pieces that I think would really beef up this feature:

1. you can determine the "direction" of the link. Very simple really, basically which way does the link point. This could be huge though for your guys' upcoming MindMaps if you plan to implement diagrams of live links between tasks - please, please! a huge bonus for my team! This way the diagrams could be even more dynamic. You could show a lot of process-type stuff, like when an HR candidate moves from "prospect" to "hire" with the arrows, or relating features inside Server diagrams, ERD's, etc. This would really trump the functionality of Miro and LucidChart, which only produce static diagrams.

2. Custom naming. Great use case here - follow-on tasks, something that is nice in Asana. So you'd have one task which would have the relation called "follow-on" task. On the other side, you'd have the relation "originating task". The field would be on every task. But if you add the link in the task as a "follow-on," the "destination" task would pick up the link in the "originating task" custom field. Again, hopefully this wouldn't be too hard to implement.

3. Ability to customize a bit of attributes of this field. I have been testing a new tool called Fibery. It has a very nice feature where you can customize the attributes you show in a related link area (2nd image). So you could allow for the related link to show the task ID, status, possibly assignee, and make it configurable with the ellipses.

4. Hovering over task to see all the data, and edit. You guys just put this out for unfurled links in task descriptions and comments - terrific feature! So if you could just add it here that would be great.

- Adding linking for goals, task lists, folders. These entities around ClickUp are important and should really be available as well. I often will have a task type "idea" and want to convert to a list, or a goal, and I could see that represented if I could just link to those other entity types, not just tasks. You guys already have Goals showing in the "top" area if a task is in one, so good start!

Hope that's useful, and can't want to see what you guys do with this! Hopefully implementing all this functionality :)!! 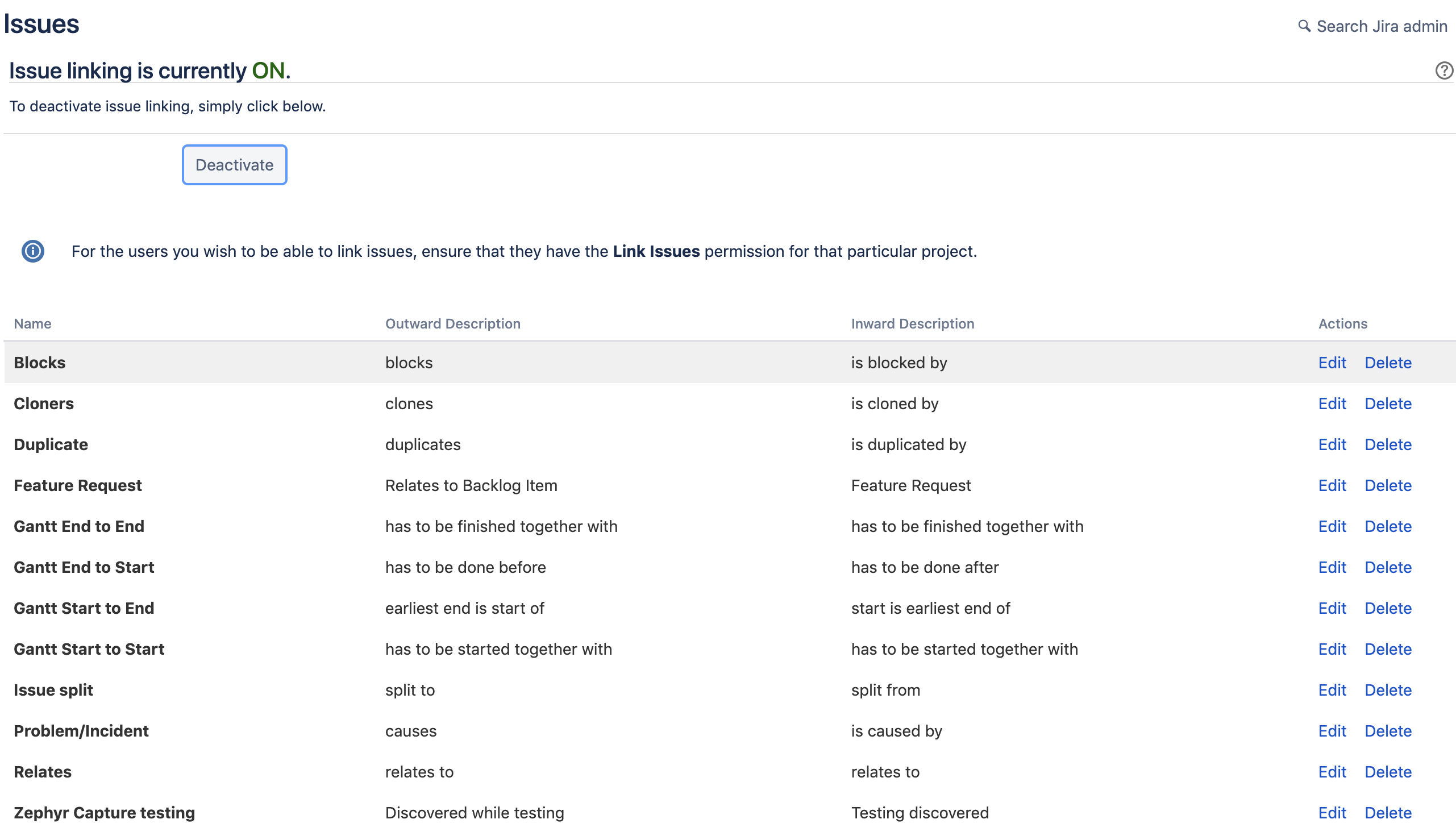 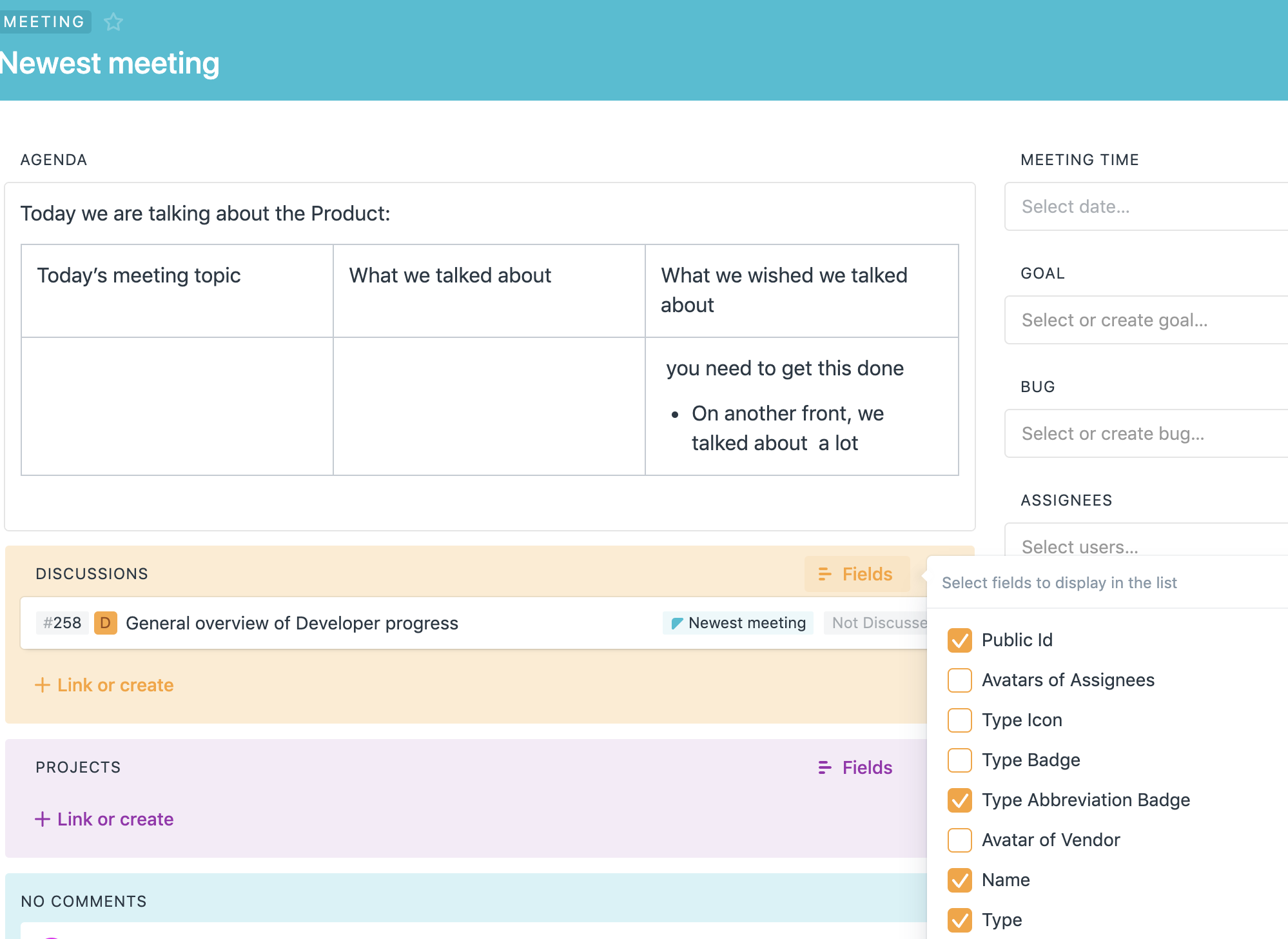 Showing a task id as opposed to full task name would work, with the caveat that a full take name is displayed on hoover and the the task id is a hyperlink to the task page.

@Drag Ivko: yeah, i prefer the name of the task—truncated for space if necessary—over the task id, but i agree that the task id could be a sufficient stand-in if something like full-name on over were included.