Too often, something I do will need me to prompt ClickUp to initiate the change. I will either have to refresh or toggle something. Custom Fields come to mind. I just had to refresh to see a statue edit.

When I create tasks in list view, sometimes I need to refresh the browser to see the new tasks. It's very frustrating.

What would be extremely helpful here would be to post exactly the actions that aren't syncing in real-time for you. Our question would be: when you say Custom Fields, which field are you referring to and where in the app?

"when viewing a recurring task, the displayed Due Date will not always automatically refresh after setting the task Status to Closed" - @André Peters thank you for a great example 🙏

This will greatly help us identify the areas in our app that we need to fix the asynchronous behavior.

@Zach Blodgett: You should also make sure all async updates happen whether a task details are currently open or not, this will be needed for the split-screen feature anyways. I'm using custom styles to create a split-view experience, and nothing in List View updates while the task details are open

@Zach Blodgett: For me, the most egregious situation is this:

I have a list of about 15 tasks that I use to structure my day. These are recurring tasks that are set to create the next occurrence when the current one is set to a Done state (see attached image).

Because of how my day actually works, I don't always get to actually "checking them off" when I originally planned to (my planned workflow was to update it a couple of times per day) and I frequently end up updating it once a day or sometimes after a couple of days.

I found the handy "select all" button and the batch tasks, which are super helpful on this, but it's also this batch processing that occasionally gets hung up. I'll select most or all of tasks and update their status to "done" and they'll successfully go away, and sometimes the new ones will come back as expected (this morning it actually worked as expected for me), but sometimes they'll go away, but I'll just get the little "processing" dots at the bottom. On some occasions, some of the tasks will come back, but not all (and the ones that come back appear to be somewhat random and are somewhere in the middle of my list's sorting).

Side note - This partial load scenario also seems to be the most likely time new items will come back already selected. I'm not sure what that's about or if it's related.

This seems to have the highest likelihood of happening when I'm doing a catch-up from a couple of days, because the recurrence algorithm doesn't just skip straight to "start today" (side note - I'd love for there to be a "skip to future start/due" type of option for this scenario; or if that exists, make it more discoverable, since it's not in the new recurring interface) so I have to go through the process a couple of times. In those situations, the first batch often refreshes (though it can sometimes be sluggish to do so) and the second batch doesn't or only does partially.

In all cases, it'll either load or hang. I've very rarely, if ever, experienced it hang for a bit and then load. I can also refresh it as soon as I notice it being sluggish/hanging, and everything will be caught up as expected. 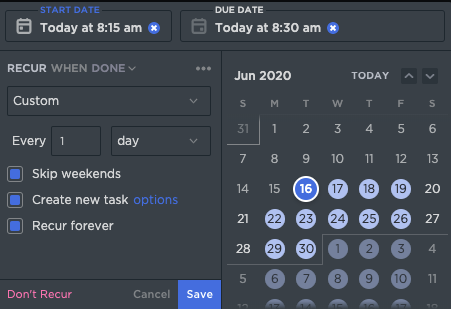 @Zach Blodgett: Having issues when updating task status. Looking at a List View grouped by Status with all "Not Started" tasks. Click the status icon from the List View, update the status, and it shows the new color on the task, but it does not immediately create a new section for that status in the view. If I reload, it then appears where it should be. Hope this helps!

I couldn't grab screenshots, but I was able to get it to misbehave this morning. The ClickUp app _really_ doesn't like to batch complete and recreate recurring tasks multiple times.

Same tasks as my previous comment, above, but I neglected it for a week and needed to catch it back up. While catching it up, I ran into all of the issues mentioned, plus a new one.

A couple of batches in, I encountered the issue where all the tasks load back in, but some are still/already selected. Eh, whatever...they all loaded in, right? Nope. Hit "select all" and they all select as expected, but when I try to batch change their status, I see the statuses for a second, but then it changes to an error message that says something like "no shared statuses across tasks." Uh...that's not right. They all inherit the space/list statuses, which makes me think the pre-selected ones are incomplete entries, possibly artifacts from the batch that was just cleared. (This was the new issue I ran into today. I think I usually refresh when I see the pre-selected items. I didn't today.)

Also, once I start having issues with the batch update/refresh process, I'll get an intermittent "Task ID's required" error (I tried to get a screenshot, but it disappeared before I could), with a code that doesn't really mean anything to me, when I batch complete a set of tasks. All of the tasks complete, but this error seems to usually happen at the same time the task loading gets weird and I'll get some of the tasks back, but not all of them.

I don't know if this is related, but I did just remember that Electron app means dev tools, so I opened them up and the console lists the attached error. This persists through reloads.

When I'm creating a new task in list view, sometimes it just dissapear and I need to refresh the browser. Sometimes it needs 2 or 3 refresh. This is a daily issue.

Just got this error and now my task list isn't refreshing. Nothing in the dev tools console, though. :(

Not sure if this is related, but when someone else on the team makes a change it would be nice to see that in real time.

Similar issue: when viewing a recurring task, the displayed Due Date will not always automatically refresh after setting the task Status to Closed. (Chrome/Windows 10).

I often have to refresh the browser to see the latest task status updates in the list, to get comment icons to show up in list view, etc.

Changes made by others in List View should be updated on my end using the same method that you use for team editing of descriptions/documents.

I've been noticing this too for the past fortnight. Chrome, win 10.

Seems to be worse in win desktop but chrome refreshes are slow too sometimes.